How to manage Overfitting

Wikipedia gives the following definition of overfitting:"Overfitting occurs when a statistical model describes random error or noise instead of the underlying relationship. Overfitting generally occurs when a model is excessively complex, such as having too many parameters relative to the number of observations. A model that has been overfit will generally have poor predictive performance, as it can exaggerate minor fluctuations in the data."

It can happen to have an over-optimized trading system, that could lead your backtest to lie. What you see it is likely something not happening in reality. Using a dataset for backtesting and finding the best combination of parameters can become a big mistake. In fact the more the parameters you have, like stop loss, take profit and so on, your model runs the risk of loosing ability to surf a trend and thus interprete just some noise. The following image shows a wonderful equity line. 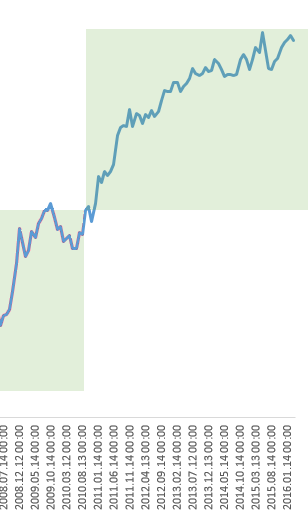 Will it be real or just a mistake given by overfitting?

If we take a look at a wider historical dataset, let's say a 40 years history, instead of a 8 years one, the result is quite different.

It does not mean necessarily that your model is not good, it could just be that such stock started a precise trend after 2007.

The behavior of a stock or any kind of futures, can be defined in a double way: by the noise they make and, inside it, by a precise behavior they have. Market behaves following a precise idea, the best thing to do is to clear noise and find the way market moves. It can sound strange, but it is important to have a row strategy, tested in a random dataset (I advice a 10 years backtest), in case it is profitable, optimize it, but remember to use little parameters, especially during the initial tests.

Once it is ok for you, take a 30 years (or even more) dataset and run the same backtest with the same parameters used before. There are three possibilities for the 20 previously not backtested data: the model loose money, is flat or behave exactly as for the last 10 years.

As a general rule, never overfit the model, just make up your mind with a trading idea, run row backtests and decide whether they are good or not from this first approach. As a second step, optimize it for the period under analysis (10 years is enough) and finally run a longer test in order to show its profitability for a not overfitted dataset. If profits still remain, well... You might have found your way to make money

"If knowledge is expensive, try ignorance"

Corso base per imparare a programmare un Expert Advisor in MQL4 per Metatrader 4 April 11, 2020

The Best Automated Trading Software is not enough October 6, 2019